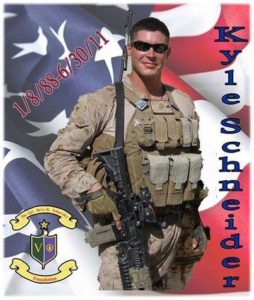 (SALISBURY, NC – 5/22/2019)—The StarCom Racing team is proud to announce they will honor the life of fallen U.S. Marine Cpl. Kyle Schneider at this year’s 600 Miles of Remembrance during the 60th annual Coca-Cola 600 at Charlotte Motor Speedway this Sunday. The windshield of the SCR 00 Chevy, driven by Landon Cassill, will proudly display Cpl. Schneider, who gave the ultimate sacrifice while deployed in Helmand Province, Afghanistan at just 23 years old.

“Kyle Richard Schneider was born to us a beautiful morning on January 8, 1988,” said Lorie Schneider, mother of fallen hero, Cpl. Schneider. “Kyle loved the outdoors and was an avid hunter and fisherman. We lost a part of heart and soul on June 30, 2011 as Kyle was killed in Action while deployed to Afghanistan.”

In March 2008, Kyle Schneider of upstate New York joined the United States Marine Corps. While at Parris Island Kyle was screened and accepted into Presidential Support Duty at Marine Barracks, 8th & I. After graduating Recruit Training, he attended the School of Infantry at Camp Geiger, NC where he graduated with honors and earned the Military Occupational Skill of 0311, Infantryman. Kyle then reported to Marine Corps Security Force School in Chesapeake, VA. Upon his graduation from Security Force School, he reported to 8th & I, where he served well until May, 2010.

In May 2010, Kyle volunteered for and was transferred to Echo Company, 2nd Battalion, 8th Marine Regiment, 3rd Platoon. In January 2011 he was deployed to Afghanistan in support of Operation Enduring Freedom with the II Marine Expeditionary Force. He operated with his platoon out of Patrol Base Amoo and Patrol Base Hanjar in the Sangin District, Helmand Province, Afghanistan. Kyle survived a direct IED blast while on patrol in May 2011. After care for his injuries and observation at FOB Leatherneck, Kyle insisted he be sent back to his combat outpost in Sangin. He would not leave his men to whom he was devoted, for this he was awarded the Purple Heart Medal. Kyle was later killed in action on June 30, 2011 heroically protecting his men. Kyle was posthumously awarded a second Purple Heart. Kyle gallantly rests with valor.

The 600 Miles of Remembrance will be aired live during the NASCAR MENCS Coca-Cola 600 at 6 p.m. ET on FOX. We encourage all Americans to tune-in to the race and to also follow @StarComRacing on social media as we highlight and honor Cpl. Schneider throughout the race weekend as a thank you for his sacrifice and a thank you to his loving family.

StarCom Racing, a Monster Energy NASCAR Cup Series Team, based in North Carolina was launched in September 2017. SCR purchased a Charter in 2018 and runs a full schedule in 2019. SCR was formed by a collective group of seasoned NASCAR specialists, as well as successful business entrepreneurs from SCR’s parent company, StarCom Fiber. For more information on SCR or to purchase team gear, please visit www.starcomfiber.com. For any sponsorship opportunities, please reach out directly to our Marketing Director, Elyshia Cope at ecope@starcomracing.com. 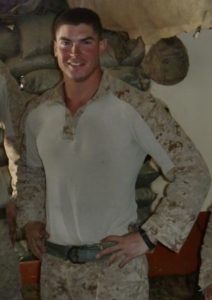